Microsoft is ending Windows XP support in April. Here are some suggestions to help you switch to a newer version of Windows.

Specifically, there are two tips I want to share with you. The first tip is not to fear moving up to Windows 8. Regardless of what you may have heard, it is not all bad. Windows 8 is pretty fast and quite reliable. There are some unfortunate UI choices, most notably the “Metro” start screen that is forced upon desktop users. But this issue is easily remedied using a free utility called “Classic Shell”. Classic Shell adds the Windows start menu back so that you really never have to see the “Metro” start screen. It even has a setting to login directly to the desktop! 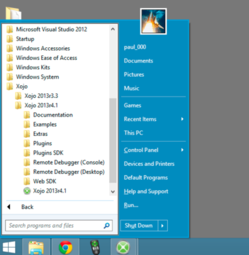 So bite the bullet, install Windows 8.1 and then install Classic Shell. I’m sure you’ll be pleased with the result.

My second tip is to use a virtual machine (VM) for the cases when you still require Windows XP, such as for a specific app that is no longer being updated. You can install a more recent version of Windows as your main OS and then run Windows XP as a VM within Windows.

In fact, if you are using Windows 7 as your primary OS, Microsoft has something called Windows XP mode that is designed for exactly this purpose, making it very easy to run XP in a VM.

Unfortunately, Windows XP mode is not a feature of Windows 8 or 8.1, which instead replaces it with something called “Hyper-V”. Unfortunately, Hyper-V seems needlessly complex for the purpose of running Windows XP, so you are better served by using VirtualBox or VMware Player. VMware also offers a converter tool that can convert a physical machine into a VM. You could use it to migrate your Windows XP machine into a VM that you then run inside of a newer version of Windows.

The benefit of running XP inside a VM is that it is isolated from the rest of your system, which will be important once support ends and Microsoft stops issues patches to security holes and malware becomes more prevalent. Some VM software even allow you to take snapshots to restore a VM to a known state, which can be helpful should problems arise. As you can see in the image below, my Windows XP VM has quite a few security updates for me to apply (since I don’t use it much). Microsoft is stopping these security updates after support ends in April. 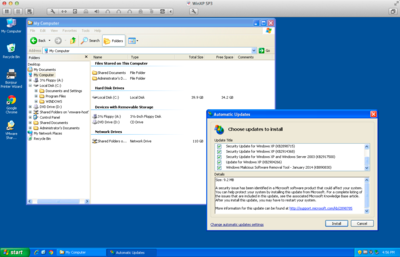 I hope these two tips can help you move away from Windows XP. If you have questions about moving on feel free to comment here or ask me on twitter @xojo.

Update: You may want to give Windows 10 a try.