Update: Xojo iOS was released in Xojo 2014r3. Download Xojo today and try it today or give us 5 minutes and watch how easy it is get started with Xojo iOS!

We are continuing to work hard on support for building iOS apps with Xojo. We believe Xojo will provide the easiest and fastest way to build applications for iPhone and iPad. Our focus so far has been on the underlying framework. The video below includes a demo of an iOS app we created in Xojo. I showed a small part of this app at the Xojo Developer’s Conference earlier this year.

One of the things that will differentiate Xojo from many other iOS development tools is that it uses native controls just as Xojo does on all the other platforms that it supports (OS X, Windows, Linux and the web). It might surprise you to know that many other tools don’t; they use pictures of controls. While this is easier for the developer of the tool, the result is less than desirable for the end user. Apps made with these tools often have controls that don’t quite match the look, feel and behavior of apps that use native controls. For example, today Apple will likely announce the ship date for new iPhones and iOS 7. iOS 7 has an all-new look and feel. The iOS apps you build with Xojo will automatically look and feel correct on both iOS 6 and iOS 7. iOS 7 isn’t used in this demo video, but here’s a screenshot of this same demo app running under iOS 7. 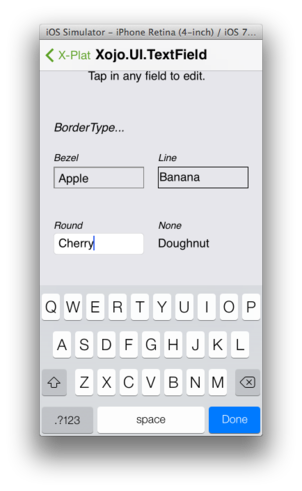 In this example, you can see that the tile bar and keyboard as well as the fields, take on the appropriate look for iOS 7. The background isn’t yet automatically set to white for iOS 7 but we will take care of that for you before we ship. There’s a lot more work to do to complete Xojo’s first release with iOS support but you can see it’s coming along quite nicely.