Left Handed: Being Outside The Norm

Being that it’s Left Handers Day and I am left-handed, I thought I’d share some interesting facts about being left-handed and how it relates to Xojo, Inc.

At Xojo, the percentage of left-handed people has always been high. Currently 33% of our staff is left-handed. I can’t explain why that is. I don’t think we have a bias towards lefties. On the other hand, my brother who is a lawyer specializing in employment law, will tell you handedness is not a protected class in the US, so we could discriminate if we wanted to do so. Nah, you righties are interesting and fun to watch. 🙂

While I’ve seen a range, the most common statistic on the percentage of the population that is left handed is 10%. Why are lefties so rare? Research suggests that cooperation favors same handedness. That makes sense. Any left handed person can tell you that right handed scissors are not comfortable to use. However, when it comes to competition, being different usually (though not always) gives you the advantage. There tends to be more left-handed people in sports than in the general population. Among professional baseball players, 50% are left-handed. Similar numbers are found in hockey, boxing, fencing and table tennis. One notable exception is golf where being a lefty has no advantage – and may even be a disadvantage. As a result, the percentage of PGA golfers that are left-handed is only 4%, considerably lower than the general population.

Is being left-handed the result of genetics or environment? It turns out, the answer is both. Studies on identical twins have shown that they do not always share the same handedness so clearly genetics is not the only factor. With two right-handed parents, the chance of me being left-handed was only 2%. That certainly makes me feel special. Three of the last five US presidents (Obama, Clinton and Bush Sr.) are left-handed. Four of the five original designers of the Mac are left-handed. Talk about defying the odds!

We did a quick survey via social media and our newsletter: among the 257 developers polled, only 59 were left-handed, amounting to 22.96% lefties and 77.04% righties. That’s slightly above or in-line with there general population’s averages. 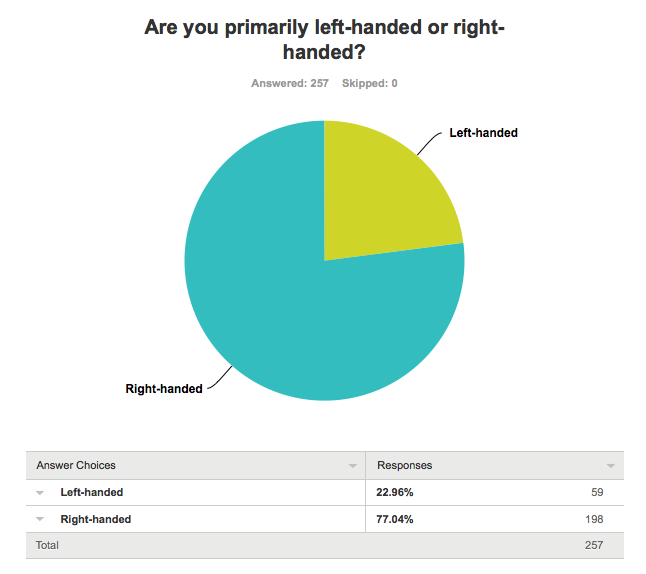 There are of course pros and cons to being left handed:

This is not a comprehensive list but it would not surprise me if the cons out-weigh pros. Perhaps I should have been a professional baseball player? Interestingly, several Xojo staff members, bat/golf with the opposite hand they write with.

I feel like there must be more pros to being left-handed than I have mentioned. I call upon my fellow lefties to comment and tell the world about the many other benefits to being better…I mean, left-handed.