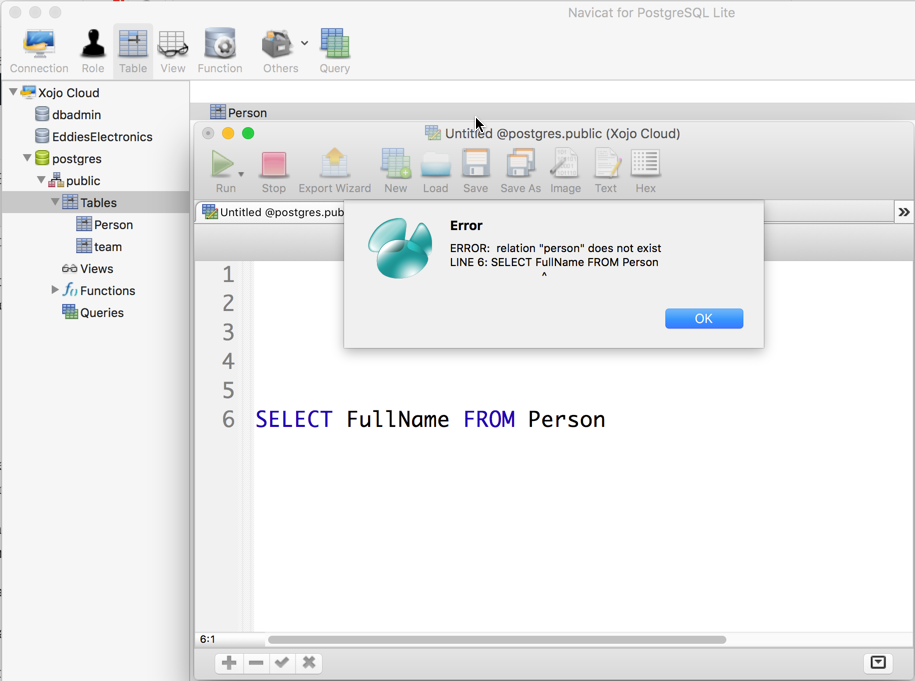 I’ve ran into PostgreSQL case sensitivity myself before and I’ve seen it come up on the forums, so I thought it might be a good thing to bring up here.

Sometimes you hear that PostgreSQL is case-insensitive, but it isn’t really. What it actually does is convert your SQL to lowercase by default. So take a look at this SQL:

This gets converted to:

That is nice if you happen to like to write your queries with mixed casing.

But you’ll start to run into a problem if you’ve actually created the table with case-sensitive names, which happens when you use quotes around the names. For example, consider these SQL CREATE statements:

In the first two examples, you get a table called “person” with two columns called “fullname” and “address”. That may not be obvious in the second example since the names are not lowercase, but remember that PostgreSQL converts your SQL to lowercase for you.

you’ll get a syntax error:

This is because PostgreSQL is converting “Person” to “person”, but there is no table called “person”. It is actually called “Person”.

To avoid this error you instead have to write the SQL with quotes like this:

Obviously that can start to become a bit of a pain, so the moral of the story is don’t use quotes when creating tables or writing SQL queries so that everything is created as lowercase and things will work like you probably expect. You’ll especially want to pay attention to any tools you use to create SQL for you. If you use a tool’s UI to create a table and have a habit of typing in mixed case, the tool might generate SQL (or even the table itself) for you using quotes, which as you can see could mess you up later.

Learn more about PostgreSQL in the Xojo Dev Center.

Published in Database and Tips