Our goal has always been to let you focus your energy on what makes your app unique. One of the ways we do that is by handling the nitty-gritty details of the various platforms Xojo supports. For example, you don’t have to worry about the differences in how files are accessed on Windows, Linux, macOS or iOS. We take care of that for you.

Saying all this is one thing, however, and delivering it is quite another. We’ve been through some significant technological hurdles over the years. Over the past 12 months we’ve had two big transitions. The first was support for HiDPI (called Retina on macOS and iOS) which made it possible for apps created with Xojo to support high definition screens. For Xojo users, adding HiDPI support was mostly a matter of recompiling their app. If they had pictures or icons, higher resolution versions needed to be supplied but aside from that, it was effortless.

The second big feature we’ve been working on is support for 64-bit. Integers are the issue here and are almost certainly the most common data type used in apps built with Xojo. If you have used the generic Integer type, in theory, building a 64-bit version of your app should be a simple matter of recompiling. That’s the theory. What’s the reality?

Tom Catchesides of Light Blue Software found himself pondering this very question recently. Apple has recently announced that 32-bit applications would no longer be supported in the Mac App Store beginning next year. Light Blue is an app for managing the business side of a professional photographer’s work. It’s a feature-rich application with thousands and thousands of lines of code. Not knowing how long it might take to get a 64-bit version working, he decided to start on that process now. Tom said:

I wasn’t too sure what to expect from the 64-bit transition, but knowing that Apple are planning to cut off 32-bit support next year made me want to try and move our macOS app over as part of the major update that we’re working on at the moment.

Tom selected 64-bit, crossed his fingers and pressed the Xojo’s Build button. Despite the size of his app, it compiled without error for 64-bit and works fine. More than fine in fact. He said:

I’ve yet to run any benchmarks myself yet, but the 64-bit debug build certainly feels snappy and responsive. 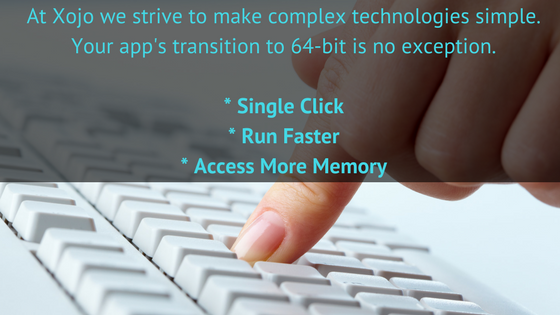 Situations like Tom’s are really where the rubber meets the road as they say. This is what we strive for. When there are significant shifts in technology whether it’s new versions of a particular OS, changes to display technology, new processors, etc., our job at Xojo is to shield you as much as possible from work that developers using other tools face. It’s really gratifying to us when we hear how simple we have made these transitions:

All the work that your team have been putting into making this transition seamless for developers is deeply appreciated!

Thanks Tom. We’re just doing our job and we appreciate your continued support.

Published in Community, Cross-Platform and Technology