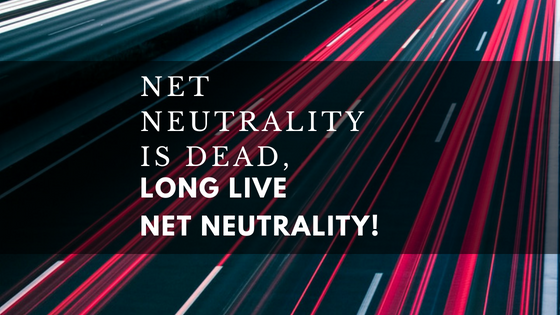 Fortunately, there are a lot of people that are not taking this lying down. There are 35 states enacting some kind of Net Neutrality-like legislation. It’s important to remember that this is exactly how the authors of the US Constitution meant things to work. Any powers not explicitly given to the federal government, belong to the states. The individual states are supposed to have the greater power. Having said that, the Internet is an incredibly important resource, a basic utility, and the Net Neutrality law was a necessary extra layer of protection at the national level that was and still is needed to keep the internet playing field level.

As I have mentioned before, in addition to Net Neutrality, we should be demanding that ISPs be required to sell access to their networks to others. This is what we did with AT&T after the Bell System was broken up in 1984. It resulted in more competition, innovation and lower prices. If ISPs were required to sell access, there would likely be far more ISPs and thus far more competition and innovation. If there’s enough competition, you might not even need as much regulation.

Your representatives do listen to those who reach out to them. When you call them, your voice is heard disproportionately to those of your fellow citizens because you took the time to reach out. This is important if you live in a state that has not enacted some kind of Net Neutrality legislation but also important in those that have. Let your representatives know they are doing the right thing. Contact them and spread the word to all those people around you about how important it is that we keep the Internet free from the abuses that are already beginning to appear.