Monaco
This font is installed by default on MacOS. It is big and very easy to read.
http://www.gringod.com/2006/11/01/new-version-of-monaco-font/

Source Code Pro
Adobe just released this font in 2012 or so and I really like it. I have been using as my default font since I first found out about it. The screen shot below shows how it looks in Xojo on Mac. 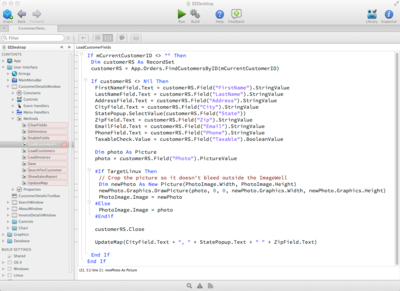 Inconsolata
This is what I used until I switched to Source Code Pro. It is a little smaller than other fonts at the same point size.
http://levien.com/type/myfonts/inconsolata.html

ProFont
This is the first alternative font I used. I think the others mentioned here are nicer.
http://www.tobias-jung.de/seekingprofont/

What do you use?
There are dozens of other great programming fonts. What is your favorite? Let us know on Twitter (@xojo).
Note: A version of this post was previously published in Oct 2012.