My Top 5 Considerations When Upgrading to Windows 10

Just about everyone I know uses mainly one OS, for me, that’s OS X. But because Xojo is a cross-platform development tool, I also use Windows and Linux. When Windows 10 was announced, I was curious as to how well it would work for me as a causal Windows user.

Though I used Windows 95 and NT, Windows XP was the first version I used on a regular basis. After that, I skipped Vista and upgraded straight to Windows 7 which was a big improvement over XP. When Windows 8 came out, I heard a lot of complaints and after watching a few demos, I decided to stick with 7. It didn’t seem long before Windows 10 was announced so at that point it really didn’t make sense to upgrade to 8. I waited for Windows 10 which came out this week.

When upgrading to a new version of Windows, there are 5 things I care about:

Let’s tackle these one at a time.

1. How easy will the upgrade be?

Major Windows upgrades are usually at least a few years apart and the user interface tends to change with each release so it’s pretty important that it be easy. I run Windows via VMWare. To upgrade I duplicated my Windows 7 (64 bit version) VM library and then upgraded that to Windows 10. This is the closest thing to how a regular Windows 7 user would upgrade. The upgrade process was very simple and intuitive. I think just about anyone could run through it without questions. If you just follow the default settings you’ll be fine.

Past installers have felt a bit complex. One thing that was obvious to me during this upgrade was that Microsoft was really trying to make the upgrade process feel simple and friendly. The progress messages that appeared as the installer ran were less techie and more comforting than in the past. It’s a welcome change. Honestly, and I don’t mean this as a jab, the installation process felt more Apple-like than ever before. 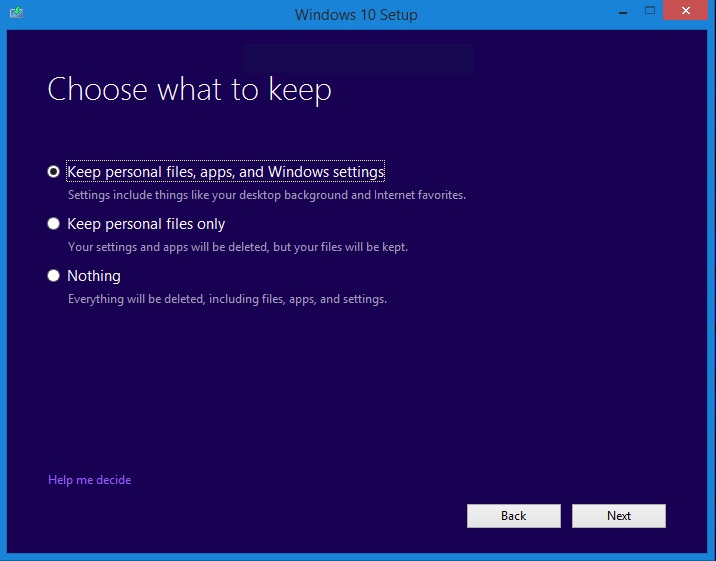 The install was done much faster than I expected. I’ve heard reports that installing Windows 10 has bricked a disturbing portion of those that have installed it, but I had no such problems. There’s been a discussion on Reddit about this as well with most people saying that the install was so smooth they kept looking for something that must have gone wrong but couldn’t find anything!

2. How quickly can I boot and login?

3. Is the new interface intuitive?

The transition from XP to Windows 7 was an easy one and honestly, a welcome upgrade. It’s important to occasionally refresh the user interface as well (even if you don’t change the utility of it much). If you don’t occasionally refresh your app/software starts looking old. Of course if you’re not careful you can go off the deep end. After seeing demos of Windows 8, it was clear to me that it was a version I was going to avoid. In Windows 8 Microsoft changed too much leaving users without enough references to their past version of Windows 7 that they felt a bit lost.

Windows 10 brings back the thing that users depend on constantly: the Start menu. This by itself makes the user experience intuitive for anyone who has ever used Windows before. 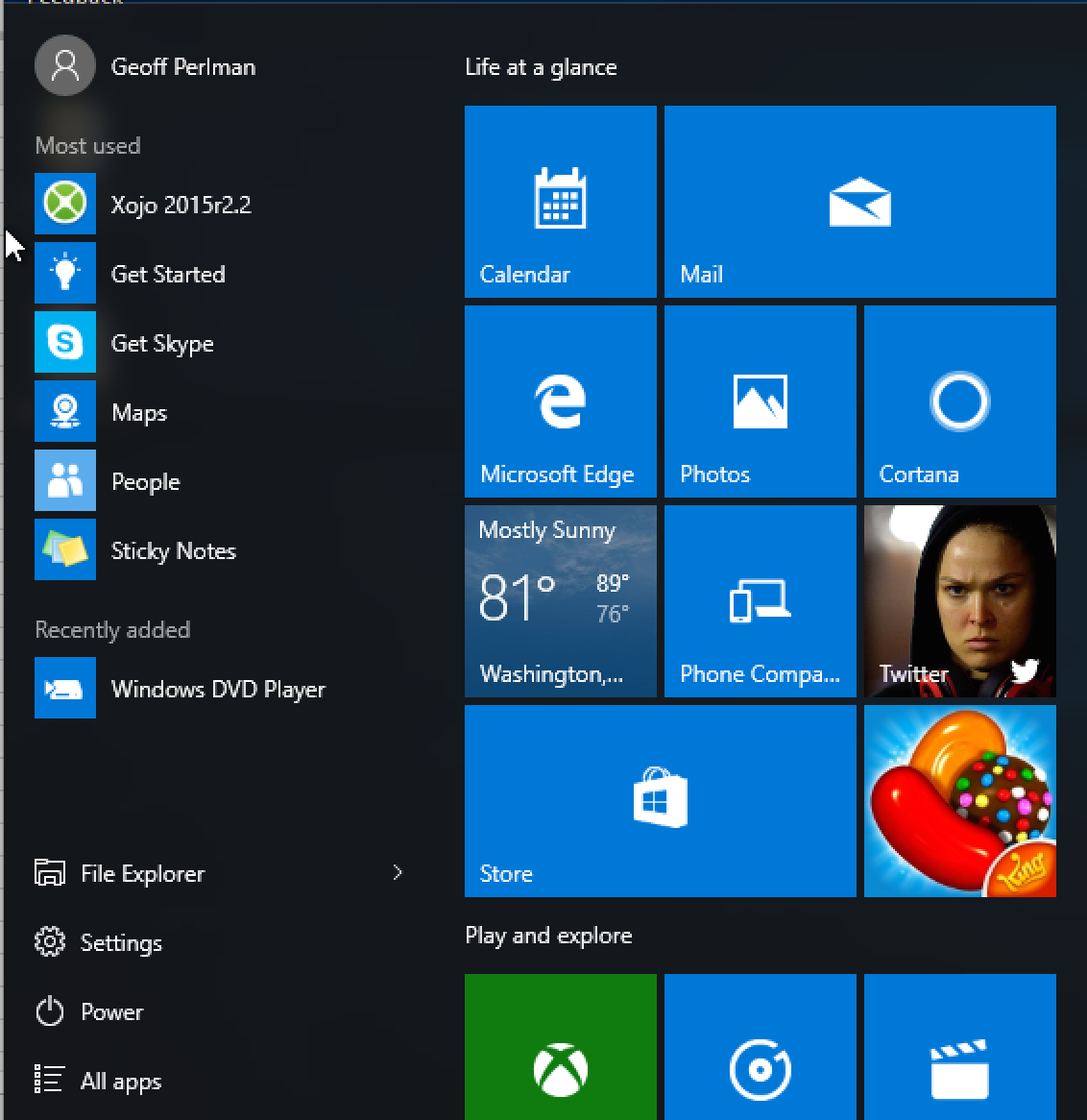 With the familiar and decidedly refreshed Start menu I can quickly and easily get to where I need to go. I particularly like the All apps feature which makes finding an app (especially when you can’t remember its name) quick and easy. I don’t care for the animated panes on the right-hand side however as they seem more distracting than useful. For example, if I want to know what the current weather is like, going to the Start menu is not my first thought. Perhaps these apps should have been defaults for the Taskbar instead. You can resize the Start menu horizontally to show more of these app panes but you have to drag quite a bit before the resize happens which is not intuitive. It would have been better to add a widget that does the resize all at once.

When deciding what apps to show in the Start menu, they made some odd choices. For example, they kept Sticky Notes but not the Calculator. This is all probably configurable but the Calculator just seems to be one of those often used apps that should be there by default especially since it is in Windows 7.

In Windows 7 the Control Panel has a toolbar that makes it feel sort of like a web browser. I found that more confusing than helpful and it exposed a lot more options making it feel overly complex for its utility: 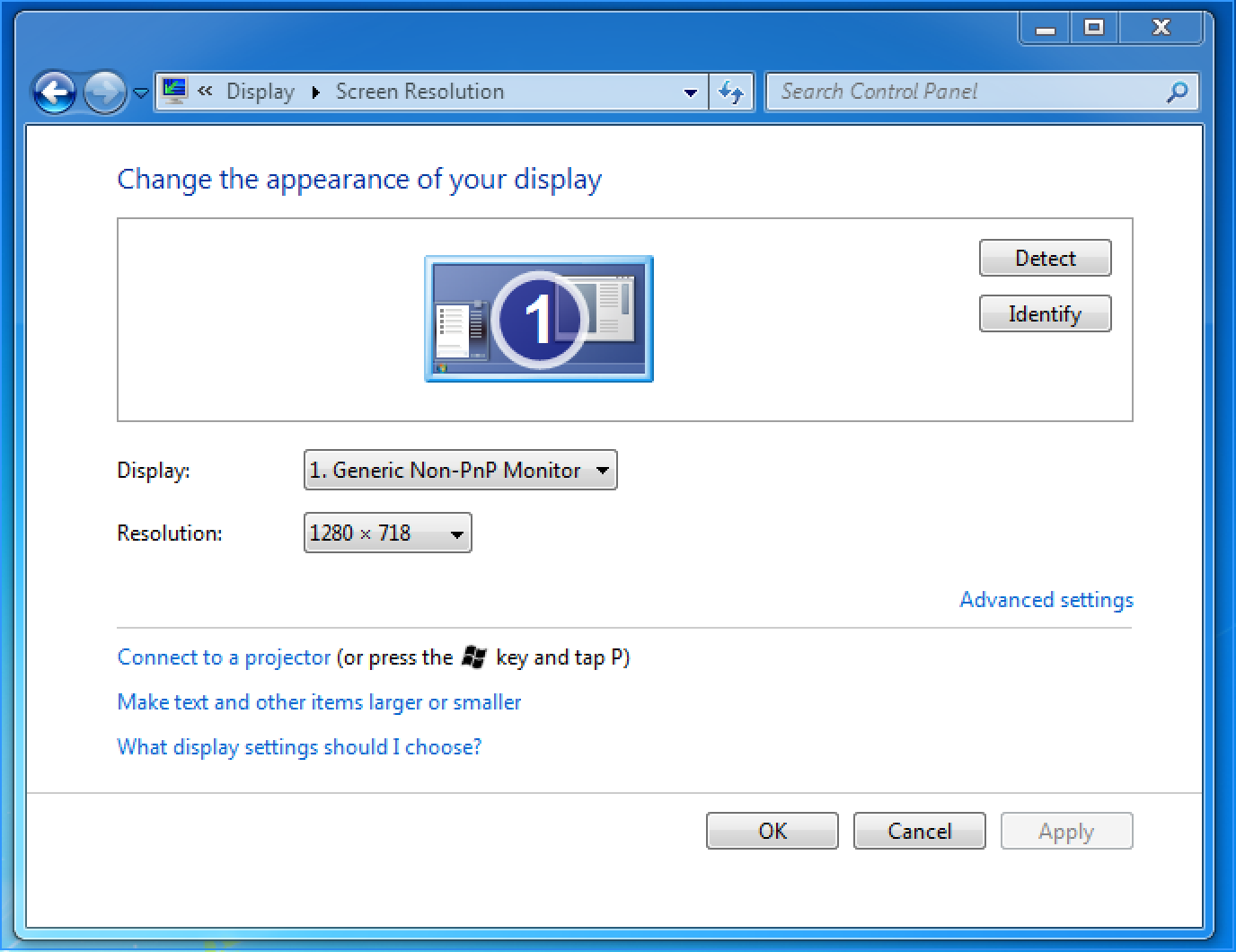 In Windows 10, Control Panel is now more appropriately titled “Settings” and the various panes used to adjust settings are clearer and simpler. The toolbar is gone, replaced by icons that are obvious. 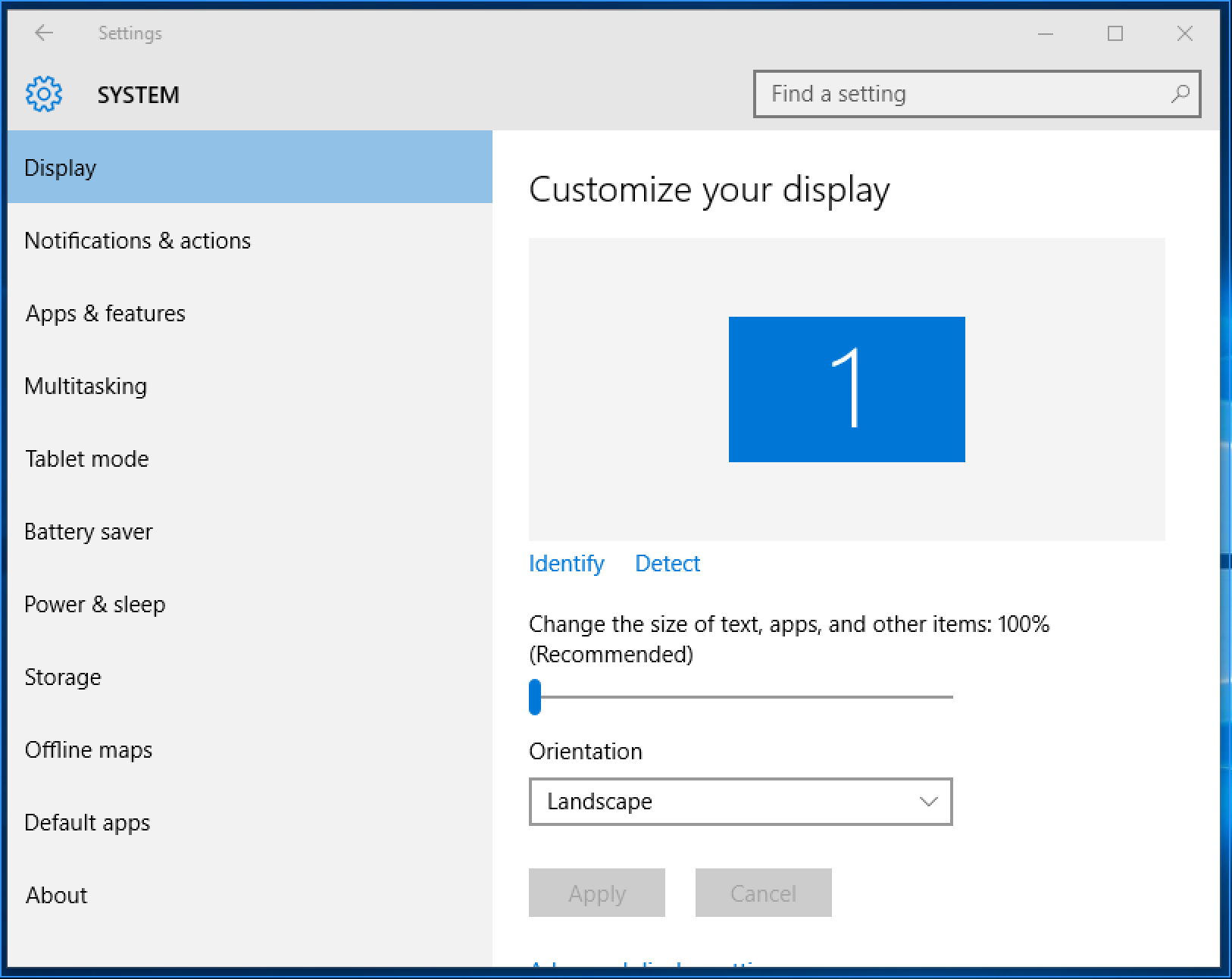 I’ve been using a MacBook Pro with a Retina display for 3 years now. I was really hoping that Windows 10 would take advantage of it but it doesn’t. Text is just as pixelated as ever. Perhaps Windows 10 cannot detect my MacBook Pro’s high resolution screen. I looked through the Display settings but couldn’t find any way to tell Windows that my screen was high resolution. This could be more of a VMWare bug then a Windows 10 bug.

The File Explorer in Windows 10 is much improved. For example, in Windows 7, clicking the Desktop icon in the File Explorer actually showed many things that were not in fact on the desktop at all such as Libraries, Control Panel and Network. In Windows 10, you see only what is really on the desktop which is far more intuitive as well as easier since the view is less cluttered. 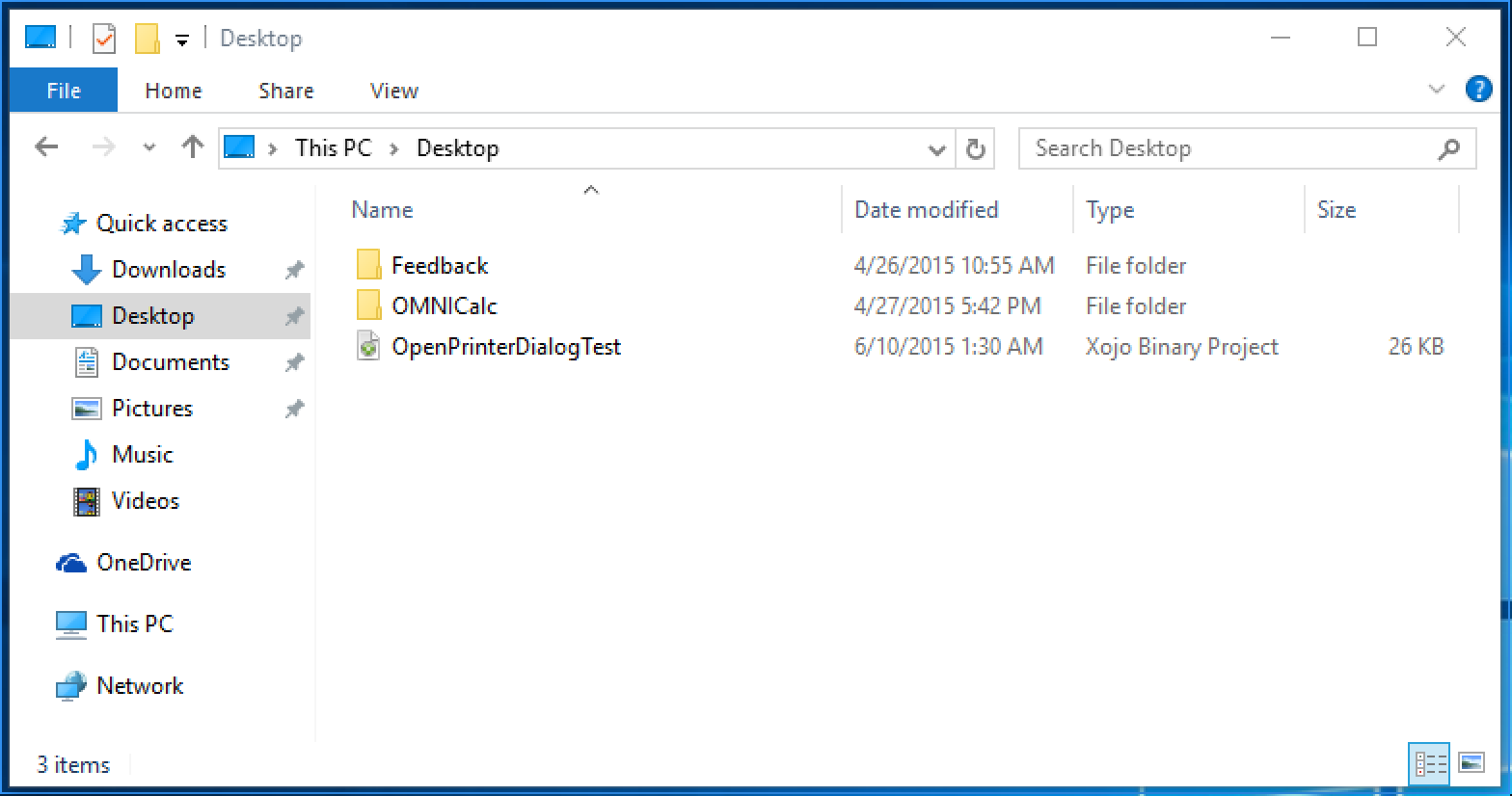 Notice that Network is still accessible in the left-hand pane but it’s now a starting point rather than appearing to be on the desktop itself. I noticed an inconsistency with menu handling in the File Explorer. Getting to the File, Home, Share and View menus requires clicking whereas in most Windows applications, I can run the mouse from menu to menu to reveal them without having to click each one. And speaking of those menus, they could really use some additional thought as they seem cluttered in what is otherwise a cleaner, less cluttered interface.

In Windows 7, these are menu items rather than a toolbar. I think menu items work better or possibly incorporate a dialog box. For as clean as the rest of the Windows 10 user interface is, this just seems messy.

Overall, the Windows 10 user interface seems a bit more polished, intuitive and smoother than Windows 7. For me it’s not a huge change but it’s certainly a decent improvement and it looks more modern to be sure.

4. Are my documents all still where I expect them to be?

The short answer is that yes, all my documents were where I left them. Finding and accessing them was easy. This may seem like a non-issue to some of you but from talking to non-techie friends who are Windows users, installed a major upgrade in the past has often been an anxiety-producing experience because they could not find some of their documents or apps. It’s nice to see that in this regard, the Windows 10 upgrade is quite smooth.

I don’t run a lot of apps outside of what comes with Windows because my primary use of Windows revolves around testing Xojo and apps made with Xojo. Having said that, Xojo and apps made with it all seem to run just fine. Paul Lefevbre discussed this in a bit more detail. The Edge browser also seems to support Xojo web apps without any issues, at least at first glance. My Taskbar was pretty much exactly as I had it in Windows 7 which was a good thing as well.

Let me review what I see as the pros and cons of upgrading to Windows 10:

My overall experience was quite positive. It was easy to upgrade, the interface worked pretty much as I had expected and there are some nice, new features. My documents were where I left them and my apps still work. In terms of how I use Windows, it feels like I can quite easily switch from Windows 7 to Windows 10.

Though it’s not my primary OS, if it were, there are a few cons.

The new Edge browser does not seem to allow you to change your default search engine. It claims you can but it only supports search engines which support OpenSearch. Since neither Google nor DuckDuckGo (my preferred search engine) seem to support it and I don’t recognize any of the others in the short list of engines that do, it seems like it effectively does not allow you to default to a search engine other than Bing.

With Windows 10, it appears that Microsoft is changing its business model to one of selling services and displaying ads. This is apparent in their new privacy policies (which have been heavily critisized) but is noticeable right away in the stalwart application, Solitaire – which apparently now shows ads which can only be removed by paying a $10 annual subscription fee. Really? For Solitaire? I think most users will take 5 minutes to find an alternative, free Solitaire with no ads. If Microsoft really is going to incorporate ads into the user experience, many people may find that a significant downside to upgrading.

Nevertheless, this is the version of Windows that Microsoft is going to be putting its energy behind. With the Windows PC market in decline and no foothold in the mobile market, Microsoft must make Windows 10 successful at any cost. If you are a Windows XP, 7 or 8 user, you will be upgrading to Windows 10 at some point. If not now, when you buy your next new PC.

If you are a Windows XP user, Windows 10 is a significant upgrade in terms of user experience as well as security which by itself is a very good reason to upgrade (we’ve blogged about the need to move away from XP many, many times).