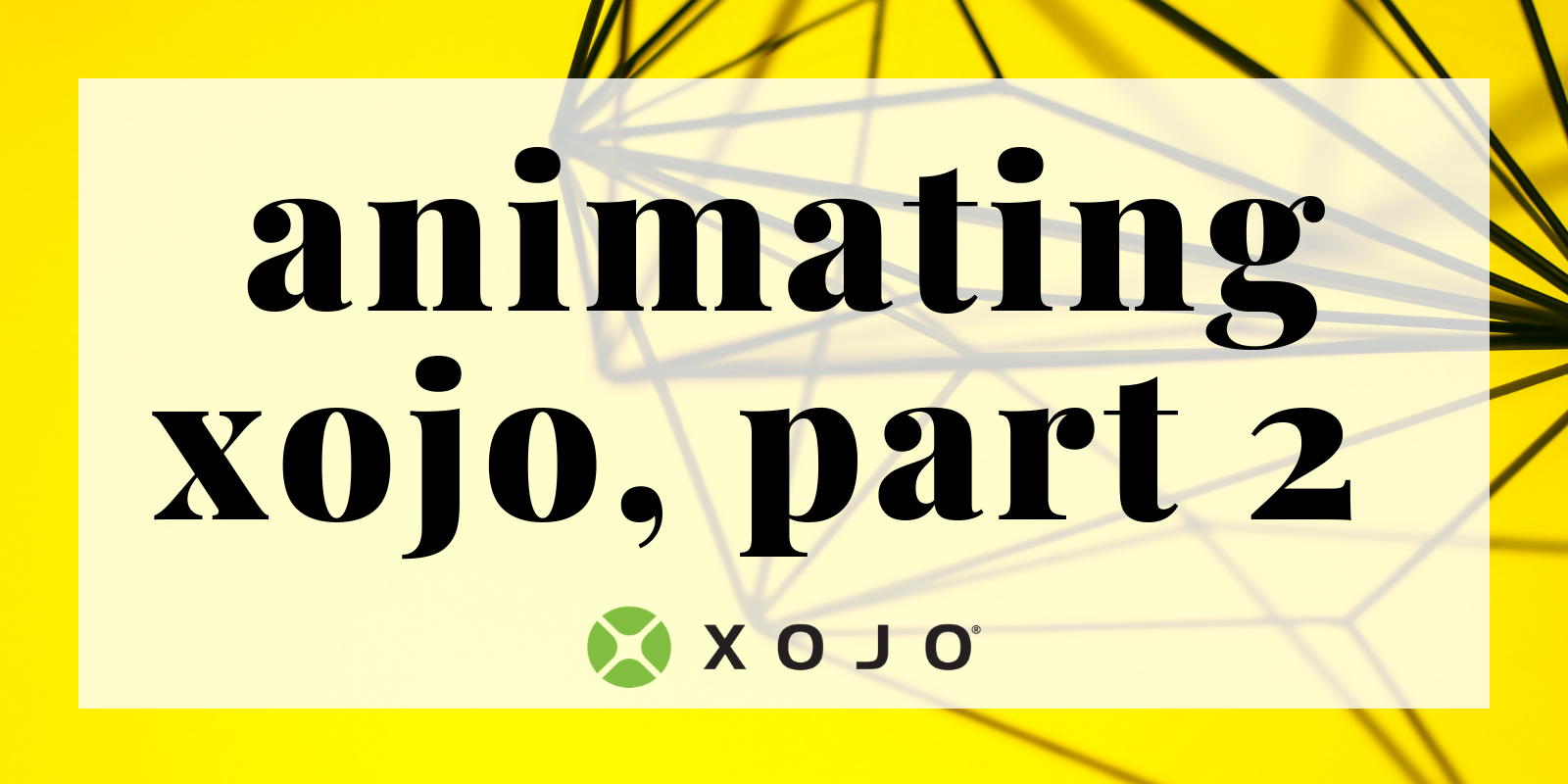 Continuing with what we previously learned in Animating Xojo, Part 1, this version introduces the use of linear interpolation to calculate the current stage of the animation at each step, plus switching to a Dictionary object for variable storage to setup for future parts in this series.

Last time we used a static animation step that was calculated in advance to modify the width of our element. That method is fine for many uses, but for more advanced things we want to get a bit more involved with linear interpolation.

The new method will shorten the steps taken if something locks up your application UI so the time you’ve chosen for your animation to take to complete is honored. Previously, if something suspended your application’s main thread, the animation would halt and wait during this period and 250ms could become 100ms before the lockup and 150ms after the lockup. Now, if your selected animation time is 250ms and something suspends UI updates, the animation will complete after the UI updates have resumed as if the UI had never become unresponsive, resulting in a true animation time that roughly matches the specified time (I’ve seen +/- approximately 0.03 seconds using this method with a timer set at the minimum period for the debugging OS).

What is Linear Interpolation

Linear interpolation (or lerp) in animation is used to calculate change based on the total amount of time a process should take, the amount of time passed since the start of the process, and the change in value from start to finish. By using these three values we can determine, at any given point within our animation time-frame, what our current value should be.

You can read more in-depth information about linear interpolation here.

In code, linear interpolation is a fairly simple algorithm. We provide the following:

We can express that graphically with the two red points below representing our starting and ending values, the blue line representing the current position between those two values over time.

By Berland. Based on png-version Image:Linear_interpolation.png. Newer version by ElectroKid – Own work, Public Domain, Link

Applying this to our previous code requires quite a bit of modification.

First, we need to keep track of when the animation started, the width value when it started, and what we want our width to be at the end. Previously we used properties of the AnimatedCanvas class to track each value we used in our animation. In this version we’re going to use a Dictionary to store values and keep that in a property of the canvas. This gives us a means of throwing away the animated values (setting our Dictionary property to Nil) when we’re not using them, mainly, but also looks a bit cleaner in the Properties listing in our project, and sets up for the future of this project.

We’re going to add a new property to our AnimatedCanvas class which will hold our calculation values during the animation process:

With the addition of this property, we’re going to get rid of our old animStep property.

Our MouseUp handler is quite a bit different in this implementation. Instead of calculating the animation steps based on the timer’s interval and the length of time we want our animation to run, we’re now doing the following:

As you can see from the comments above, we’re constructing the Dictionary object with the current time(s), the current width(w), and the expected width at the end of the animation(ew).

These changes also allow for the user to click again during the animation to reverse it without, theoretically, causing any strangeness such as animation skipping or jumping. The new animation operation just begins when the user clicks, cancelling the old one. Since we’re using linear interpolation, the timer’s Action event handler just keeps trucking along with a calculated width based upon the changes.

Our timer’s action handler method is also quite different. This is where we use the Dictionary we created in the MouseUp event handler and assigned to our animAction property to calculate and apply the new width of our component.

For this version, I’ve also added a couple of new events. These can be used to perform other actions that you may want to carry out when the animation process has started or ended. Here’s our two new event definitions:

When you launch the demo project, you’ll notice that there’s a lot more going on with wndAnimate than the previous version. First, I renamed the animTime property to a computed AnimationTime property and added it to the inspector, so there’s a field on the window to change this value.

Then, a group of RadioButtons for verifying that modal elements do not interfere with animation on the main thread. The choices are: None, MenuItem, and Modal Window. When Xojo was still using Carbon for macOS, modal elements would interfere with UI updates to the main window until that modal element was dismissed. There’s all sorts of technical-ness as to why, but all we really care about is that with the move to Cocoa this is no longer an issue, and the demo proves it.

Finally, I’ve moved the instance of AnimatedCanvas to the right of the Window. This isn’t purely aesthetic as I plan to use this setup in a future version to show how to run multiple concurrent animations.