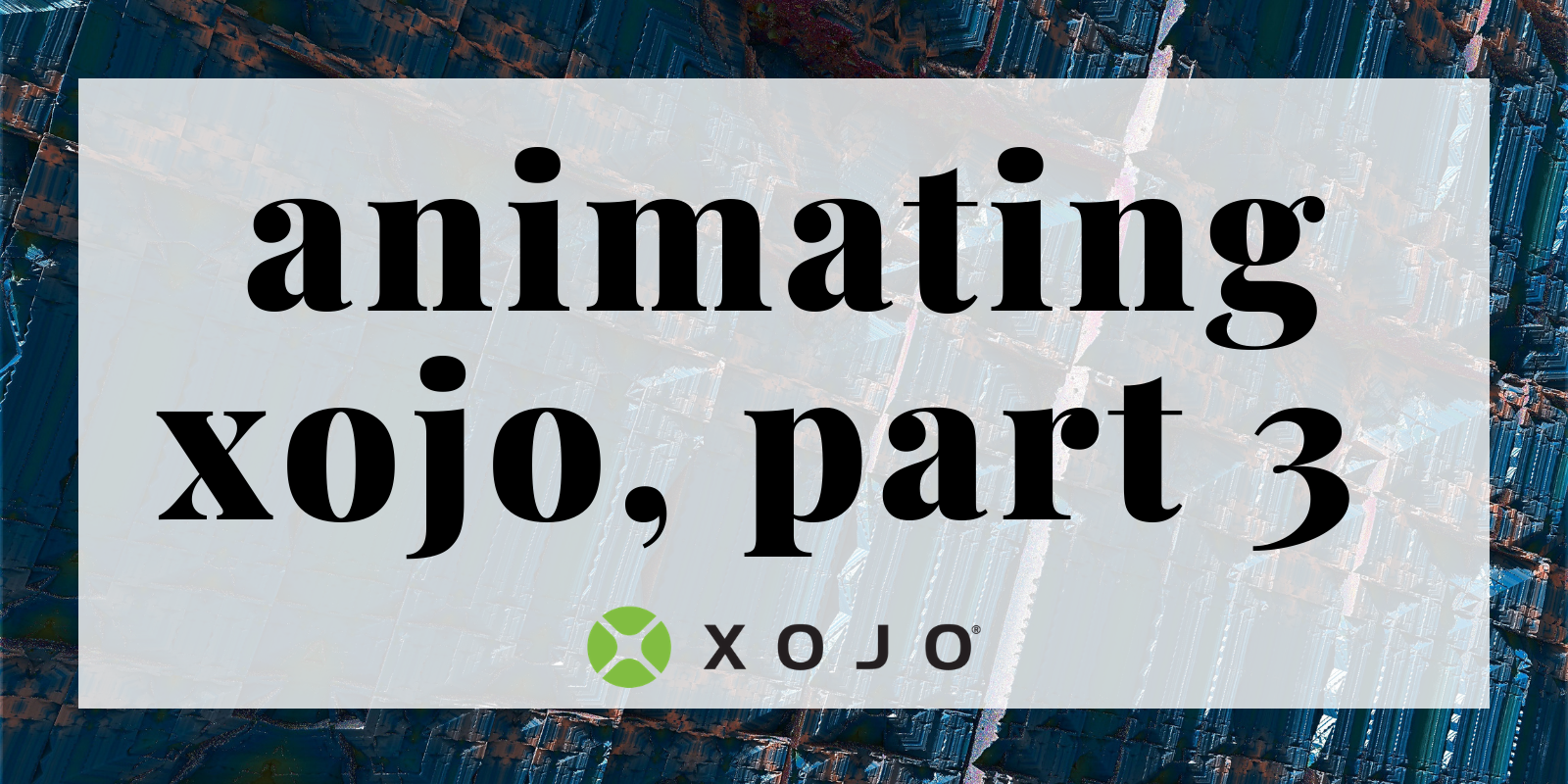 In Part 1 we covered the basic history of animating in Xojo using pre-calculated chunks to modify the width of our component. In Part 2 we went a bit further by using linear interpolation (lerp) to calculate our current width at each step of the animation process, and setup for concurrent animation.

In this part we’ll be covering a few different things, chiefly concurrent animations. But that’s not all, as I’ve added a lerpColor function to show you how to animate color changes.

Using self-contained concurrent animations in a UI class is an interesting exercise. You need to have the basic setup for an animation controller complete with a method of adding animation operations to a queue and removing completed animations. Typically, however, if you were building out animations on an application scale, you’d build a class that acted as the animation controller and may raise events for updating the elements as the animation progresses. In this example we’ll just build them straight in to our component because we want this to be entirely independent of the rest of the application architecture.

As this part focuses on concurrent animations, we’re not implementing a keyframe methodology for queuing. We’re using the queue purely to have multiple animations running together.

In Part 2 we added the following property to AnimatedCanvas:

For this part, we’re going to make a slight modification to that property definition so that it will support multiple animation operations. We’re just going to turn it into an array:

If you remember from last time we used the following definition for our Dictionary objects:

In this part we’re going to further leverage Dictionary’s use of Variant to expand our functionality. While we previously used the following Dictionary structure for our operations:

This allows us to create an animation operation for practically anything we can think of as long as we properly code for it in our animation Timer’s Action event handler method, and give it any length we desire rather than a common time for all operations.

Adding to the Queue

We’re going to add a new method to our AnimatedCanvas class called animQueue_Add that takes animOp As Dictionary for its sole parameter. This method will act as a basic out-of-the-loop controller when an animation is to be triggered and determine if this is a new animation operation or one that is already currently in the queue.

As you can see, it’s not an incredibly complex method. We’re just checking our animQueue property to see an animation currently exists for this operation. If we find it, we replace it. If we don’t, we just add it to the tail-end of the queue. The final line, as in the previous version, kicks off our animation timer.

The next new method we’re going to add is our method to check if the animation operation already exists in our queue. It’s a straightforward method where we compare the “op” value of items in the queue to a specified “op” value. If an operation exists for that action, we return the index within the queue, otherwise return -1.

One new feature we’re implementing is what I call animation time preservation. This shortens subsequent animations of the same operation to honor the original time until one of them is able to complete.

For our animation time preservation, we’re adding a property to the class so we can turn this on and off at will. We’ll make it public and computed so we can add it to the inspector.

Getting the Oldest Op

This all really relies on one method, animQueue_OldestOp which checks the “o” key of the specified animation operation to see if an older operation already exists. If it does, we’ll return it, otherwise return the operation passed in to the method. If you take a look at the changes to animQueue_Add above, you’ll see how we use this.

For this example, to highlight multiple concurrent animations, I’ve also added the ability to animate the height in addition to the width. We’re basically just duplicating the existing properties for our width animation, but applying the values to height. This could be modified to use a Point or Rect to achieve the same effect, but this implementation is better for showing how the modifications we’ll be making to the animation Timer’s action actually work by breaking it down independently.

As with our Width animation, we need to track what our target expanded Height should be as well as the current state of that dimension. For Width we have an expandedWidth property, so we’ll add an expandedHeight property to match.

In this version, we’re also renaming our old expanded property to isExpandedWidth:

And adding a new corresponding property for Height:

Finally, we need a property that keeps track of whether we’re currently animating our dimensions so that our subsequent clicks during a color-only animation properly toggle our isExpanded* properties. We could do this by searching the animOp array, but just storing it is probably a bit quicker.

There are better ways to implement tacking of these states, but for this example I want the verbosity.

Since we’re now animating both Width and Height and implementing our rudimentary animation controller, we need to make some changes to our MouseUp event handler. Primarily we’re duplicating what we already do for Width to account for our new Height animation, and applying the changes to the properties we’ve already discussed. We check to see if we’re currently animating Width or Height before toggling their values to avoid issues in the animation timer’s Action handler.

For Part 3, I wanted to add a little something extra before we roll in to Part 4, just to show how we can use linear interpolation for animating any number of different properties of our AnimatedCanvas class. That means we’re going to animate the background color of our class as well!

To support our color animation in this specific example, we need a couple of new properties. These properties give us our start and end points for our color animation, and we’re going to add them to the inspector so that they can be changed when editing a Window or ContainerControl view.

Our Paint event only needs one small modification to account for the changes we’re making. We previously used a static red color &cff0000 but we need to switch to using the currentBackgroundColor property to support the animation.

Our first step in animating the color for this example is to implement the MouseEnter event within our class. We’re simply creating a new Dictionary for the animation operation, populating that with our values to be used in the animation timer, then calling animQueue_Add.

You’ll notice that, without the comments, this entire event handler is very short. Part of the goal as I build this functionality is always to make it as easy to implement as possible as I’ll likely use it in a number of different ways for each UI component. Sometimes I have the Dictionary values as parameters of the animQueue_Add method, but I want to show this in this way for this example.

If I’m implementing animation on an application-wide scale, I’ll typically use a custom class called AnimationOperation, with the values for the operation stored as properties and passed via the Constructormethod, then a call to add the resulting class instance to the queue for the AnimationController.

MouseExit, like MouseEnter, just creates and adds an animation operation dictionary with the values we want to use. In this case, we want to revert the color back to the default background color.

Now that we have our class setup out of the way, we can create our lerpColor method. In this example I’m simply applying linear interpolation to the Red, Green, and Blue values of the passed colors, but you could use any other subset of color properties that you want for your desired effect.

This is where we’re making the most changes in a single method. Not only are we implementing the animation controller methodology, but we’re also adding two new animation operations — height and color, in addition to the original width — so a lot of this will look different from Parts 1 & 2 in this series.

You can see from the code that we’ve moved all of our variable declarations to the top of the method. We do this so that we’re not slowing things down inside the loop by disposing of and redeclaring variables that may be used multiple times. In Part 4 we’ll be adding Pragmas all over the place to make sure our code is even more speedy.

Inside the loop we fill our animOp property with the current animation operation and verify that it isn’t Nil. If animOp is Nil, then we need to go ahead and remove it from the queue.

Next we populate our animOpType, animStartTime, and animLength variables with their corresponding values, and calculate our current timePercent for our lerp functions.

The next block is where all of the magic happens. You can see that we’ve just used the same basic methodology from Part 2, but extended it to support animating color and height in addition to width.

One important thing to note is that we’re calling Invalidate(False) at the end of our conditional if the current operation is a color operation. Without this, our color property’s value would be animated, but the UI would not update to reflect that if this were the only operation currently underway as changes to both Width and Height automatically invalidate the control.

We also do a bit of work on our queue when an animation is complete by removing the current operation when it is complete, and instead of checking the animQueue property for Nil at the end of the method as we did in Part 2, we now check if there are any remaining operations and halt the timer if the queue is empty.

While this method may not be best for every situation or every coding style, I’ve found it to be versatile and dependable. This minimal animation controller is surprisingly robust.

As I mentioned earlier, this animation controller does not make use of keyframes for chaining animations. This could be implemented fairly easily, and while I have done it for a number of projects in the past, I won’t be covering that in this series as you should have some idea of how to incorporate that if you so desire.

In the next part I plan to cover easing to some degree which, like lerp, controls the speed and change in our animation and can add a massive amount of appeal to your user interface.

You can download the example project for Part 3 here.