Xojo’s Library offers a good amount of UI controls ready to use: buttons, input text controls, lists, popup menus, progress bars, panels, labels, a control to play movies, etc. However, sometimes we need to display exactly the same combination of controls, using the same layout, in several windows of an app. What’s the best approach in these cases?

Obviously, adding the same bunch of controls again and again on each window is not the best solution; even less so when we consider the need to add the exact same code in each of these controls.

Using ContainerControls in the Window Layout 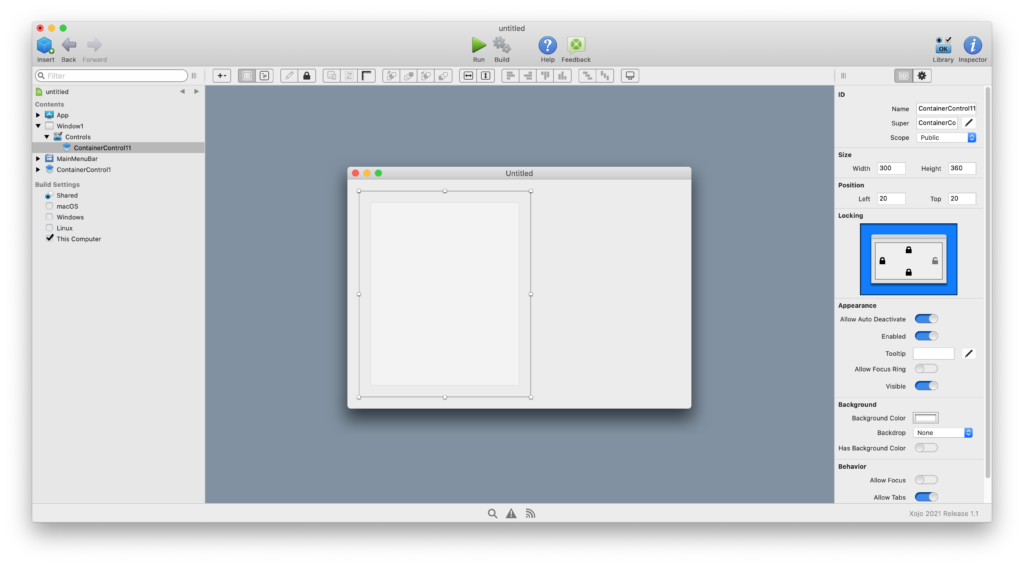 Select the item ContainerControl1 in the Navigator to change the layout, add new UI controls, and change the position, size or behavior.

If we had added a ListBox control (default name ListBox1) to our ContainerControl1, setting its Scope property as Public in the Inspector Panel, it can be accessed using the usual dot notation. For example, from the Open Event Handler added to the Window1 item:

This solves one of the communication problems; but, how can the controls embedded in a container “communicate” with the Window containing the container? That is, how do we send the value of the selected row in the ListBox1 control to the Window?

Considering all of this, the simple solution to communicate between the controls added to a ContainerControl and the Window or Windows that will be using that container is by adding new methods and new Event Definitions on that ContainerControl (in this example, the one named ContainerControl1). There are other techniques, but we are going to use this one in this tutorial.

Continuing with our example,  add a new method to ContainerControl1 using the following method signature:

Next, with ContainerControl1 still selected in the Navigator, choose the Insert > Event Definition option in order to create a Event using the following signature:

Click on the method added previously to access the associated Code Editor and type the following line of code:

The method will simply raise the defined event passing along the received value as the argument.

Now, select the ListBox1 item on the ContainerControl1 item, and add the Changed Event Handler. This is the event raised every time the user changes the selected row in the ListBox. Type the following code in the associated Code Editor:

Add the Open event to the ListBox1 item, type the following code in the associated Code Editor:

Now, add the defined event in ContainerControl1 to the ContainerControl11 instance added to the Window1 layout. Select that item and choose the Add > Event Handler option. Choose the SelectedRow event handler and confirm the selection clicking the “OK” button.

Type the following line of code in the associated Code Editor:

Of course, you can do something more useful with the received value; but this is useful enough to show how the values can be sent from the ListBox control to any window where the container can be used.

Add a new Class to the project and use the Inspector Panel to change its name to MyContainerClass and the Super field to ContainerControl.

Add the Changed event to ListBox1 and type the following code:

Next, add the second container ContainerControl2 to the project window Window1. The layout could be similar to that of this screenshot: 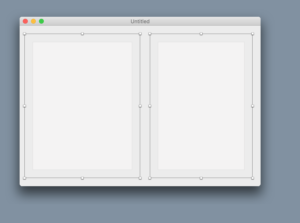 Select the ContainerControl21 item under Window1 > Controls and add the SelectedRow event handler. Add this line of code to display the received value in a message box:

Xojo also lets you add ContainerControls at runtime, something that is really interesting and makes Xojo apps flexible and powerful. Let’s do that in a simple example:

Select the Window1 item in the Navigator and delete the ContainerControl11 and ContainerControl21 items. With Window1 still selected, add a new property using the following values in the Inspector Panel:

Add the Open event to Window1, type the following code in the associated Code Editor:

Try to change the selected row in any of the ListBoxes. Nothing happens! As you may remember, in order to “forward” the selected row value from the ListBox to the window we needed to add the SelectedRow event handler. This is something we can’t do when adding new container instances at runtime. In order to do that we need to use the AddHandler keyword. This lets us redirect an event handler to a delegated method. Quit the app to return to the IDE and, with Window1 still selected in the Navigator, add a new method using the following signature:

The only thing left is to associate the event name with the memory address of the method that will handle it for each of the Container instances added at runtime. Again, select the Open event tied to the Window1 item and change its code like so:

The lines of code really are interesting:

As you can see, through AddHandler we are instructing the SelectedRow event from every container instance to be handled by the ListBoxSelectedRow method added to Window1.

On the other hand, WeakAddressOf is a Xojo programming language operator allowing us to get a “weak” reference to the memory address where the ListboxSelectedRow is found so it can be invoked. 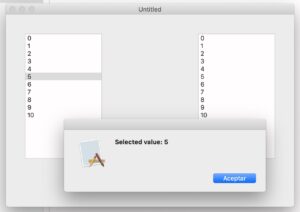 Questions? Ask me on Twitter @XojoES or on the Xojo Forum.